One of my favorite shirts that C owns is a bright pink Ralph Lauren polo.  The shirt itself has sentimental meaning to me as it is a gift from a close friend. 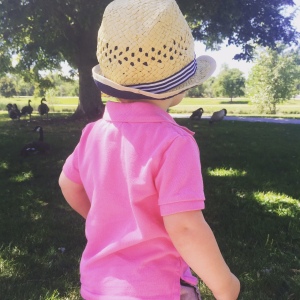 Throughout his life, thus far, C has been mistaken for a girl only 4 times.  All of those times were the days in which he was wearing his pink polo.  Now I know that everyone’s child is mistaken for the opposite sex, at some point.  I also don’t have a problem with people thinking my son is a girl.   With that being said, it is interesting to me how people respond when they seem C in pink:

It is interesting to me how we have such strong associations of what boys and girls wear.  I am not surprised by it; but my spouse and I have made a conscious effort to raise our child in a gender neutral environment.  We want C to be able to run and play in the dirt, love trucks and sports; but also to be in touch with his emotions, play with dolls, and express himself through art. Most importantly we want him to make his own choices and follow his passions without limitations.  It concerns me from time to time that our approach to parenting will cause C to feel negative consequences to the choices he makes.  If we allow him to wear a skirt to school, or become attached to a special doll, what happens to him out when he is out in the world?  I don’t want my son to be teased, harassed, or forced to conform to the gender expectations of a “boy”.  But I am left feeling discouraged after just a few outings in a shirt that is pink in color.

My observations have left me wondering when society became so gendered in toys, dress, and colors.  I can distinctly remember in history books seeing boys in dresses and I know it isn’t possible that boys and girls have always conformed to the gender identities that are the norm in today’s modern society.  I did a little research and here is what I found…

Mid 18th century: An oil painting with a boy in a blue frock

1920: Paperdoll of a boy with pastel and lacy clothing 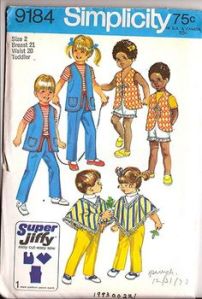 All of these images are courtesy of a Pinterest board that is dedicated to celebrating Jo Paoletti’s book, Pink and Blue: Telling the Boys from the Girls in America.  Jo Paoletti is the Associate Professor of American Studies at the University of Maryland. Her book discusses “the decline of the white dress for boys and girls, the introduction of rompers in the early 20th century, the gendering of pink and blue, the resurgence of unisex fashions, and the origins of today’s highly gender-specific baby clothing.”  She makes many interesting points and shows the flip flopping of what is common for boy and girl dress throughout the centuries.  She also talks about the rise of highly gendered clothing.  She attributes society’s fascination with gendering our babies with pink and blue to the beginning of the medical advances that allowed us to determine the sex of our children prior to birth.  Jo Paoletti writes an intriguing and thorough account of our social norms and constructions around boy and girl clothes.  Over all a great read and some wonderful historical insights. A summary of Ms. Paoletti’s findings can be found here: When Did Girls Start Wearing Pink? | Arts & Culture | Smithsonian.

Until the days in which our gender norms change once again, I am excited to continue to allow my son to make choices to dress himself in the ways he choses. I can only hope that our choices as a family will contribute to a more conscious and open society.

One thought on “When my son wears pink”